A group of climbers on Wednesday after they were told to leave by employees at Yosemite National Park.

YOSEMITE VALLEY, Calif. — Gone were the massive granite monoliths of Half Dome and El Capitan, lost in the shroud of a ghostly and acrid layer of smoke. Gone, too, were the cascading waterfalls that plunge to the floor of Yosemite Valley, their famed beauty uselessly out of sight.

Most eerily, gone were the people. The iconic valley, usually smothered in tourists this time of year, was instead blanketed in plumes from a raging nearby 38,000-acre wildfire that forced evacuations and turned one of the country’s most popular national parks into a virtual ghost town on Wednesday afternoon. The closing is the largest in nearly three decades at the park.

Visitors were given until noon to leave. An hour later, the usually teeming cafeteria was dark, its chairs on the tables. Parking lots were empty. Campgrounds were cleared. The front door of the famous Majestic Yosemite Hotel, best known as the Ahwahnee, was padlocked with a chain.

The Ferguson Fire, which is encroaching on Yosemite Valley, is just one of some 75 large fires stretching from Oklahoma to Alaska, according to the National Interagency Fire Center, already costing millions of dollars. Thousands of firefighters are battling blazes in Arizona, Colorado, Idaho, and Oregon in what is on track to be one of the hottest summers on record for much of the region.

Nationwide, nearly four million acres have burned so far this year, about 11 percent more than the annual average at this time of year since 2008, according to the fire center.

“This is my life and this is my home. It’s heartbreaking,” said Heather Sullivan, 45, who had to leave her home in El Portal, at the foot of the Yosemite Valley. “These fires are for real, especially when you live in rural places, and the fire crew can’t get there yet, so I had things ready to go in my home and in my truck. It’s so overwhelming when you get that call.” 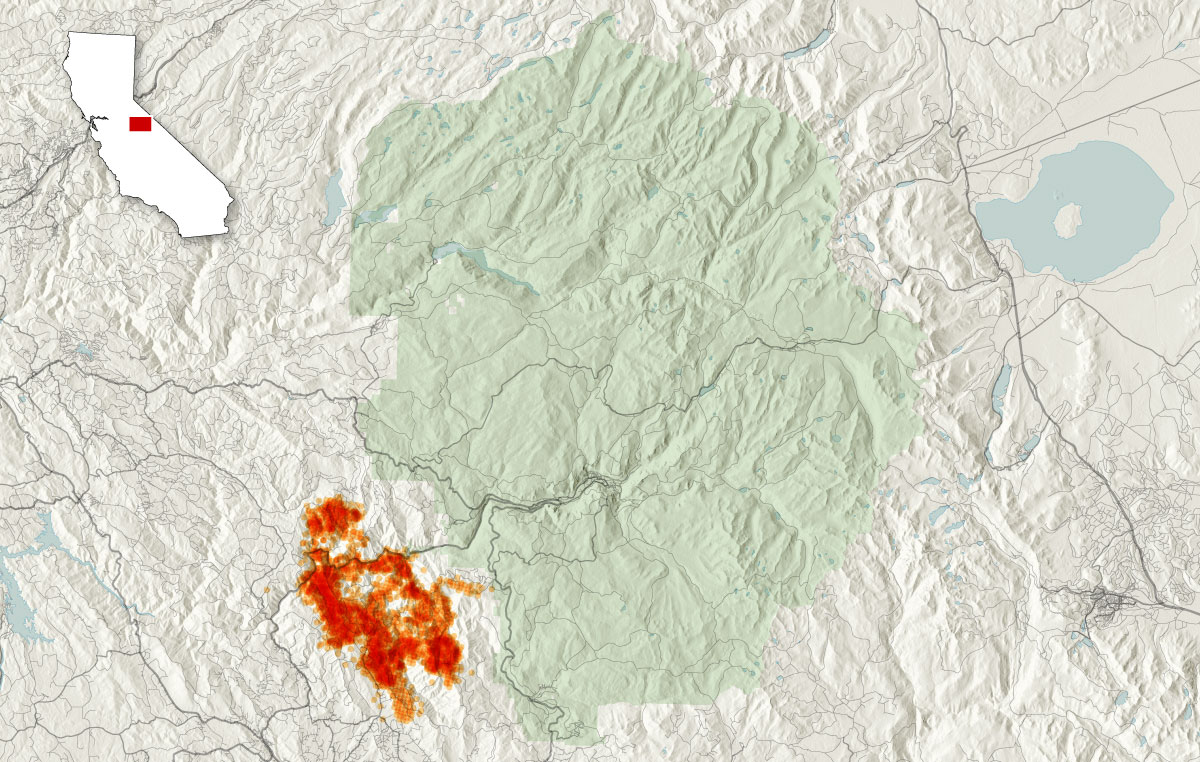 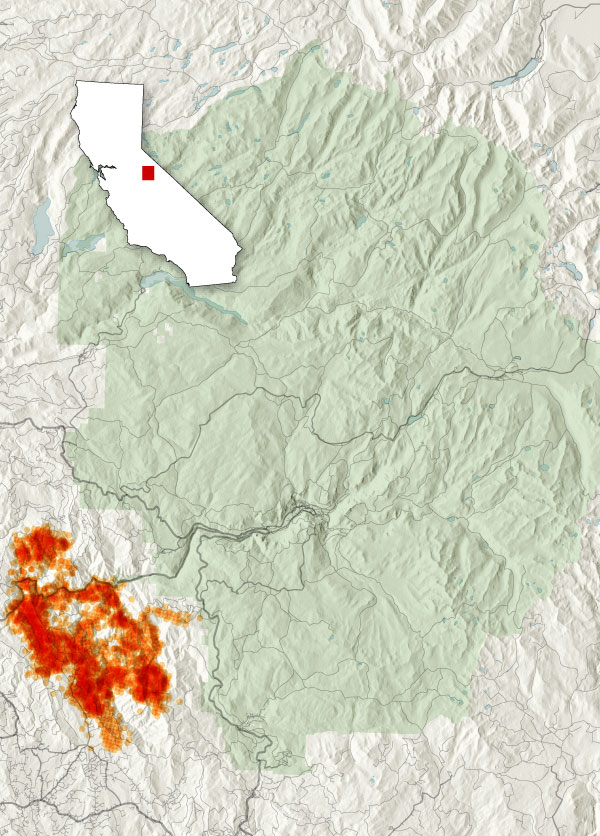 For all the attention the Yosemite fire has attracted, the situation was potentially more severe elsewhere, especially in Oregon, where 15 active fires have burned 110,000 acres. In California, five fires have consumed 42,000 acres; Colorado has eight fires with nearly 200,000 acres burned.

The dry weather has been a factor. All but 5 percent of Oregon, for example, has some degree of drought, according to the United States Drought Monitor. Colorado, especially the southern part of the state, had a very dry winter with little snow.

Dry vegetation is more likely to ignite and burn, especially as it dries out even more in summer months.

The National Weather Service on Wednesday issued more extreme heat alerts for Southern California, the southern tip of Nevada and most of Arizona. Even Yosemite, in the Sierra Nevada of central California, expects continued high temperatures in the 90s.

“They’re baking out there,” said Greg Carbin, a meteorologist with the service’s Weather Prediction Center, in College Park, Md.

The smoldering heat has upended daily life over much of the West. In Colorado, outdoor barbecues and fireworks have been banned on public lands. In Arizona, an animal shelter closed for two days this week to focus on keeping the dogs and cats cool, rather than putting them up for adoption. A newspaper in Palm Springs, Calif., posted a video of crayons melting in the sun.

Many cities in the Southwest have set temperature records this summer, and Palm Springs was expected to set a record on Wednesday of 120 degrees. But individual daily records do not have all that much significance, Mr. Carbin said.

More important from the perspective of climate change are temperature records over time. For instance, Palm Springs this year has had the warmest previous six months in its historical record, dating back 68 years. There are similar examples across Southern California and Arizona.

There were six heat-related deaths within 10 days earlier this month in Riverside County, which stretches from about 70 miles east of the coast to the Arizona border. A wildfire near Idyllwild that broke out Wednesday also prompted evacuations in the San Jacinto mountain area of the county.

“We can’t recall seeing a stretch like this,” said Jose Arballo, a spokesman for the county health department, who added that the cities in the western end of the county have had temperatures above 115 degrees for days at a time. “We’re seeing next-level heat for prolonged periods — when it gets cool we’re still going to be in the 90s. We would not be surprised if we see more deaths from this.”

In Yosemite, many workers complained of heat-related illnesses and had urged park management to close the park for the last several days.

The weather combined with the rugged terrain of Yosemite is also making it difficult for firefighters to push back the blaze.

“The conditions are incredibly strenuous, and we’re seeing triple-digit temperatures in places and some sections are extremely remote,” said Dan McKeague, a spokesman for the United States Forest Service.

Each fire comes with its own origins and dangers. In Oregon, Sgt. Julie Denney, a spokeswoman for the Jackson County Sheriff’s Office, said the lightning storm that started a fire a little over a week ago is what sticks in her mind most — the intensity of it, and the strangeness too, coming early in the day, around 9 a.m. Summer lightning in the West is a regular afternoon phenomenon, when the heat builds up and suddenly breaks in violent release.

But on that muggy, oppressive morning, about 115 fires linked to that particular storm started in the county and in neighboring Josephine County, and as of Wednesday, three major fires were still burning, including the Garner Complex Fire. That fire alone had burned nearly 20,000 acres, with more than 2,400 people battling it, and was only 18 percent contained.

Oregon does not have mandatory evacuation rules — law enforcement officials can cajole and strongly suggest, but cannot force people to leave — so there are no hard numbers on how many people have fled. But 300 people showed up on Tuesday night for a public meeting in a former school to hear advice on keeping themselves safe.

“There were lightning strikes everywhere,” Sergeant Denney said. “Those range from a tree that caught on fire to something that spreads over quite a few acres. If you look at the lightning map from that day, it’s pretty amazing.”

Smoke and air quality, compounded by the heat, have been the biggest issues in recent days, but the smoke also helped firefighters, Sergeant Denney said, by creating a haze that kept the temperatures down slightly. Wednesday was expected to hit 103 in Medford, Ore., the county seat, with no precipitation expected.

In Colorado, with temperatures in Denver hitting record-tying readings of 105 degrees, firefighters in the rain-starved mountains and brittle valleys have spent the summer trying to beat back some of the largest wildfires in the state’s history.

Scrims of smoke hang over the mountain lakes and high alpine trails where overheated city dwellers retreat on the weekends for some relief.

Homeowners in mountain neighborhoods spend much of the day sniffing the air on their porches and looking for wisps of smoke that could be the first warning sign of a cataclysm.

In Southern Colorado, longtime firefighters accustomed to blotting out brush fires started by sparks from passing train cars watched with astonishment as the Spring Creek Fire engulfed more than 100,000 acres and destroyed about 150 homes and other buildings in June.

“This fire was totally different,” Mr. Littlefield said. “It redefines conflagration for me.”

In Yosemite, lodging and camping reservations were canceled through Sunday. While parts of the park’s edges remained open to visitors, if they could navigate the road closings in the surrounding Sierra Nevada foothills, entry into Yosemite Valley on two-lane Highway 120 was blocked by a cadre of park rangers about 20 miles from the valley itself.

Even from there, the Ferguson Fire made its presence felt, through all the senses. Forests of trees disappeared into the murk. The smell of burning wood pierced the nose, burned the eyes and tickled the throat.

On the valley floor, below the thickest parts of the blanket, gauzy sunshine occasionally turned the landscape from gray to a sunset orange. Among the last nonemployees to leave the valley were about 30 climbers at the base of the 3,000-foot face of El Capitan. They had been climbing and rappelling for several days, long after the Ferguson Fire began, and had planned on staying through the weekend. They huddled in the haze to figure out where to go.

“This has been hanging over our heads, that they’re going to close the park down,” said Steve Zagata of West Virginia.

At the abandoned Yosemite Valley Lodge, the lobby lights were on and the jazzy background music that greets guests remained. The Wi-Fi worked better than usual.

The only expected guests for the weekend were firefighters, park rangers and other employees who remained behind.

School's out forever for 'unschoolers'