A restaurant in the Federal Triangle section of Washington was nearly empty on Tuesday.

WASHINGTON — It was almost lunchtime at a food court downtown and Yonas A. Seyoum, the manager of the Esprinto Café, marched over to the cash register and printed out the morning’s sales.

“It’s crazy,” he said, holding up a drooping receipt.

He had done $52.71 of business in five hours, miserable even for January.

“Not even enough to pay her,” Mr. Seyoum said, motioning to the cashier, a young woman leaning on the counter and playing gin rummy on her phone.

He added: “It’s like a ghost city — totally dead.”

As the country nears the end of its third week of a government shutdown, the consequences of Washington’s political dysfunction are landing right on the city’s doorstep. The Washington metro area is home to the largest number of federal workers in the country, and as their paychecks begin to stop, the negative effects threaten to spread across the region.

This is an unusual problem for a region that boasts one of the country’s richest, strongest economies, powered by government spending and a large, stable federal work force.

It is a place that lives on the legions of lobbyists and lawyers who knock on the doors of government. At the core is a federal work force divided between those at the upper echelons of the Civil Service making six-figure salaries, and those making less pay in lower-ranking jobs. The Washington area’s African-American population has traditionally been one of the chief beneficiaries of the government’s large pool of middle-class jobs.

And those who are the most affected are people at the lower end of the income ladder with no savings and no way to make up the loss.

The metro area has about 360,000 federal workers, representing 11.5 percent of the region’s full-time work force, according to Stephen Fuller, an economist at George Mason University who focuses on the Washington area. Of that group, about 145,000 have been furloughed, he said. This does not account for the many federal contractors whose pay is dependent on the government and who, unlike those in the Civil Service, do not expect any back pay.

Mr. Fuller said that as long as the shutdown ended before February, the economic effect on the overall region would be minimal — about 2.8 percent of the region’s economic daily output. Still, the longer the shutdown went on, the higher chance it would cause more lasting damage, he said.

When other parts of the country suffered during the Great Recession, the area around the nation’s capital boomed. Over the last decade, a wave of new restaurants, bars and retailers have opened, catering to young professionals. But some of the small businesses that have sprung up in recent years are now feeling the brunt of the shutdown. 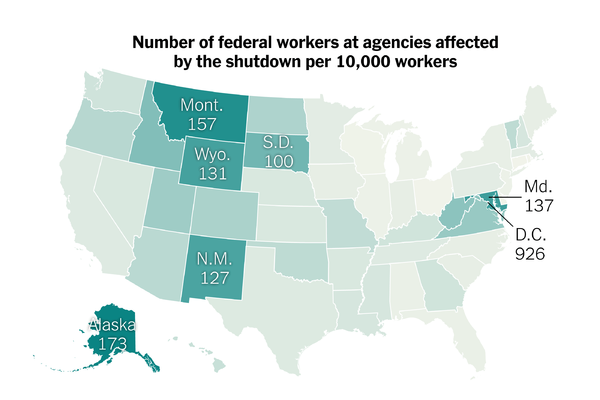 The Government Shutdown Is Affecting Federal Workers in Every State

As lawmakers in Washington continue their debate over the shutdown, their constituents across the country are feeling the effects.

Abu Ahamed, a Bangladeshi-American food truck owner parked near the National Portrait Gallery, said that his sales had plummeted and that he had taken the emergency step of offering passers-by free samples.

“Sample?” he shouted, holding a piece of lamb kebab on a toothpick toward a woman walking by, who smiled but did not stop.

He said he had made about $50 on Saturday and $172 on Sunday, tiny fractions of what he usually earned, and was worried he would not be able to pay his rent if the shutdown kept going. He applied for a job with his old employer, CVS, and was told he would hear back in two weeks.

“I said, ‘I need the job right now!’” he said, his head poking out the window of his green truck.

At home, when he explained the family’s situation to his 10-year-old daughter, he could tell she was troubled.

“I said, ‘Do you have enough for the lunch?’ and she told me, ‘But Daddy, you don’t have any money!’” he said. “I think she feels hunger but she doesn’t tell us. As a father, this is very painful.”

The shutdown is already beginning to test the operations of the city of Washington itself, which has historically never had full autonomy from Congress and depends on the federal government for basic functions like its local court system. Large sections of the city’s public spaces — from the National Mall to the 1,700-acre Rock Creek Park — are on federal land.

The District has had to add garbage crews to collect trash from 640 federal trash bins. The agency that supervises residents on parole and probation is without a director because Congress is not around to confirm him. On Tuesday, the City Council gave the mayor emergency authority to issue marriage licenses, because the Marriage Bureau, funded by the federal government, is closed.

“It seems pretty ridiculous,” said Mayor Muriel Bowser of the closing. She noted in a telephone interview that the city was spending around $70,000 a week to pick up federal trash and had added overtime hours for the department that processes unemployment claims, but was powerless against the bigger problem.

“We can do nothing about people’s anxiety,” she said, noting that for many federal workers, Friday would be the first day without a paycheck.

With federal workers at home, and the closing of the Smithsonian museums resulting in fewer tourists, the streets had the lonely feel of a public holiday. Lunch places had no lines. The area’s Metro transit system had plenty of seats.

For Dick Lehimdjian, who owns a salon on F Street NW whose sales had not dipped, the empty city meant one thing: His 45-minute commute from Virginia was now just 15 minutes.

“It is wonderful to come to work,” he said, smiling.

But Trang Mai, who was setting up her ice cream and hot dog truck across from the Department of Commerce on Tuesday morning, had seen a plunge in her sales. Ms. Mai said she was so distracted that she initially forgot her son’s 10th birthday.

“I’m tired, really I’m tired,” she said. She tried to sell her truck online, but so far has had no bidders. She said she told her husband to sell their house in Annandale, Va., because they could no longer afford the payments.

“You want it?” she asked, hopefully.

The area’s counties, including Loudoun, Fairfax and Arlington in Virginia, rank among the country’s wealthiest by median income. In Arlington County, where 21 percent of the residents are federal workers, Ari Valdez, general manager of The Liberty Tavern, said that when the shutdown first began, there was a spike in sales.

“People were happy they didn’t have to go back to work for a while,” he said.

But since then, sales have slowed, with one exception: Happy hour. People are coming in earlier and staying longer, but often not having dinner.

Government Shutdown Timeline: See How the Effects Are Piling Up

The longer the federal government remains closed for business, more services are affected.

He said he had moved happy hour earlier to 3 p.m. from 4 p.m. for anyone showing government identification, and that people were coming in as early as 2 p.m.

On Tuesday, one of those was Nina Prasad, a federal contractor who was sitting with her laptop at the bar, a manhattan cocktail to her right and an octopus salad to her left. She said she was still working and being paid, but that many of her calls had been canceled and her office was closed.

“It puts a stop on things,” said Ms. Prasad, 38, adding, “I’m starting to lose track of the days. Time is passing so slowly.”

Many federal workers said they had savings and could manage, at least for now. Ken Kero-Mentz, a Foreign Service officer with the State Department who has been posted in Iraq, Germany, Brazil and Sri Lanka, said his first day without pay would be next Wednesday.

Mr. Kero-Mentz, 48, said he had been taking care of tasks he never had time for. He posted pictures of furniture in his attic he has long wanted to get rid of, and now has a bit of extra cash from selling two end tables. Tomorrow, someone is coming to look at a desk.

He wasn’t worried about his finances, yet.

“I’m fortunate — I’ve been able to save some money,” Mr. Kero-Mentz said. “I’m not suffering. But I know people who are.”

Debt is a done deal, but peace truce already fades