A $3.6 billion reconstruction project at Salt Lake City International Airport. The $200 billion infrastructure program that the White House unveiled on Monday is intended to attract a huge amount of additional money from states, localities and private investors.

President Trump’s $200 billion plan to rebuild America upends the criteria that have long been used to pick ambitious federal projects, putting little emphasis on how much an infrastructure proposal benefits the public and more on finding private investors and other outside sources of money.

Unveiled on Monday, the infrastructure program that Mr. Trump has championed since the campaign is intended to attract a huge amount of additional money from states, localities and private investors. The goal is to generate a total pot of $1.5 trillion to upgrade the country’s highways, airports and railroads.

Those financial priorities are crystallized in the new guidelines established by the White House. The ability to find sources of funding outside the federal government will be the most important yardstick, accounting for 70 percent of the formula for choosing infrastructure projects. How “the project will spur economic and social returns on investment” ranks at the bottom, at just 5 percent.

In this new competition for federal funds, a plan to, say, build a better access road for a luxury development — a project with the potential to bring in more dollars from private investors — could have a strong chance of getting the green light. By comparison, a critical tunnel overhaul that has trouble getting new money might not be approved. 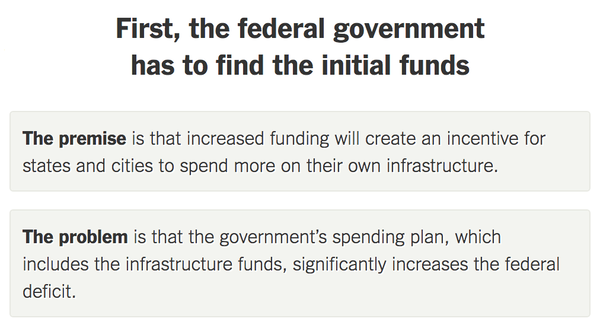 How Trump Plans to Turn $200 Billion Into $1.5 Trillion in Infrastructure Spending

President Trump’s long-awaited infrastructure plan proposes that the federal government put up $200 billion in incentives and investments, leaving local governments and private industry to come up with the rest.

Proposals intended to serve more impoverished communities that require more state and local money, including improving drinking water in a place like Flint, Mich., could be given short shrift. Financial investors may not see a big profit in such a project.

“A private corporation has a fiduciary obligation to make a profit. The government is supposed to be providing a public service,” Mr. Sclar said.

The president’s plan recasts the federal government as a minority stakeholder in the nation’s new infrastructure projects. Half of the $200 billion promised over 10 years will be used for incentives to spur even greater contributions from states, localities and the private sector. Mr. Trump also wants to speed up the approval process.

The White House budget, separately released on Monday, also gives federal agencies the authority to sell assets that would be better managed by state, local or private entities in cases where a sale would “optimize taxpayer value.” The budget suggests that Ronald Reagan Washington National and Dulles International Airports could be among the assets ripe for new owners.

Coming up with the $200 billion in federal funding will not be easy. Republicans have already ballooned the deficit in last week’s spending agreement and with their tax cuts. Democrats are unlikely to go along with cuts that would offset the cost of Mr. Trump’s plan.

With his infrastructure framework, the president is rethinking Washington’s role.

Economic development has been the justification for federal involvement going back to the country’s efforts in the early 1800s to improve harbors and rivers for navigation. It animated the 1902 Reclamation Act that funded irrigation projects that developed the western United States.

“National economic development benefits were the cornerstone of federal support,” said Debra Knopman, a principal researcher at the RAND Corporation. “That was the point.”

Public health, safety and national defense were added in the 20th century as core values, when the government developed the national highway system and passed the Clean Water Act.

“Now, they’re putting out incentive programs that don’t have to generate national or regional economic developments,” said Ms. Knopman, the lead author of a new 110-page RAND report on transportation and water infrastructure in the United States. “It may happen, but that’s not what they’re interested in and that’s not the way they’re screening these projects.”

The math for the infrastructure plan also relies on a lot of unknowns.

Along with private investors, cities and states are being counted on to put up significant funds. They have a need. States have been struggling for years to rejuvenate creaky roads, bridges and ports. And even if the plan appears to put much of the onus on them to finance projects, any additional federal funding is welcome.

“States won’t look down their nose at adding more money for infrastructure,” said John Hicks, executive director of the National Association of State Budget Officers. “It’s seen primarily as a positive, because it continues to shine light on a shared need of infrastructure improvement.”

But cities and states are not necessarily flush with cash for new infrastructure projects.

Congress has thrown their finances into upheaval, with local lawmakers still trying to come to grips with the effects of the $1.5 trillion tax overhaul that was passed last year. Many states have already expressed concern that it will be hard for them to increase state and local taxes, because deductions on them have been limited.

Some are considering other ways, such as gasoline taxes, to raise funds, but it may not be enough to fund new infrastructure projects. A report released last month by Fitch, the ratings agency, found that many states could see their tax revenue fall from the changes to the individual and corporate taxation laws.

David Damschen, Utah’s treasurer, said his state faces many infrastructure challenges as it works to accommodate a growing population, expand its stock of affordable housing and improve the transportation system. He said Utah was already looking for new sources of tax revenue to fund projects because sales tax and gas tax revenue had been declining.

But Mr. Damschen also noted that public-private partnerships do not tend to work well in his state. “When things roll out, you’ll find what the market will do with these ideas,” he said. “Sometimes creative ideas don’t always have the level of acceptance in the marketplace as you hoped.”

The amount of federal funds — $20 billion a year — will be spread very thin when stretched across the entire country. It is also unclear how much new money, as opposed to repurposed funds, the federal government is actually supplying.

One analysis by the Penn-Wharton Budget Model at the University of Pennsylvania said that other pieces of the White House budget could end up reducing federal infrastructure spending by $55 billion over 10 years — despite the president’s new plan.

Douglas Holtz-Eakin, former director of the Congressional Budget Office and the president of the conservative American Action Forum, complimented aspects of the president’s initiative that dealt with streamlining regulations and using federal credit guarantees. But he doubted the promised total could be reached.

Beyond the math, the revamped selection standards, too, are untested. The new criteria likely stemmed from the administration’s attempt to distinguish its program and try something new.

Indeed, criteria announced just last year by the Trump administration for other transportation and infrastructure grants relied on more traditional standards. One lists safety, overall condition, economic competitiveness, environmental sustainability and quality of life as “primary selection criteria.” Another cites “support for national or regional economic vitality” as the No. 1 one objective, while coming up with new money was second.

The new plan “doesn’t allocate money in terms of congestion, economic need or the public good,” said Martin Klepper, the former executive director of the Transportation Department’s Build America Bureau. “It does it mostly on the basis of the leverage issue.”

Mr. Klepper, who spent decades in the private sector developing, financing and selling large infrastructure projects, was recruited to lead the bureau in the final weeks of the Obama administration. He said he decided to take the job even after the Democrats lost, because of the new administration’s commitment to public-private partnership and Mr. Trump’s promise of a major infrastructure plan.

“I left because I was pretty frustrated and disappointed with where the program was going,” Mr. Klepper said. “No one has any idea to the extent with which states and localities will be able to come up with the money to match the federal government.”

Does a Lawsuit Now Help the Weinstein Victims?

Malaysia Seeks to Complete a $10 Billion Project Rocked by Scandal

Why Are Mutual Fund Fees So High? This Billionaire Knows

We Have Streaming Revenue, Too, Says NBC. And We Can Prove It.

How Bell Pottinger, P.R. Firm for Despots and Rogues, Met Its End in South Africa