President Trump’s rally in Charleston, W.Va., on Tuesday is among the many midterm campaign stops he is expected to make over the coming weeks.

CHARLESTON, W.Va. — President Trump invoked on Tuesday fears of immigrant crime and angry mobs as he began a weekslong push to try to preserve the Republican majority in Congress as the party braces for midterm losses amid a cascade of scandals involving members of his inner circle.

“A vote for any Democrat in November is a vote to eliminate immigration enforcement, to open our borders and set loose vicious predators and violent criminals,” Mr. Trump told thousands of supporters during a rally in Charleston, W.Va. “They’ll be all over our communities. They will be preying on our communities.”

In a wide-ranging, more than hourlong speech that touched on the potency of his political endorsements, his love of coal and promises to build a border wall — with a paean to his mother’s turkey recipe thrown in — Mr. Trump worked the crowd into a frenzy, repeatedly demonizing Democrats as coddlers of lawbreakers who would take the country down a dangerous path.

“The Democrat Party is held hostage by the so-called resistance: left-wing haters and angry mobs,” he said. “They’re trying to tear down our institutions, disrespect our flag, demean our law enforcement, denigrate our history and disparage our great country — and we’re not going to let it happen.”

On a day that his former campaign chairman, Paul Manafort, was convicted of financial fraud and Mr. Trump’s longtime lawyer and fixer, Michael D. Cohen, pleaded guilty to campaign finance violations that he said were directed by Mr. Trump himself, the president mostly steered clear of those subjects.

But the rally offered a vivid tableau of an extraordinary period in Mr. Trump’s already tumultuous tenure. The president is growing more defiant by the day even as the scandals appear to pose an increasingly serious threat to him, embarking on a cross-country tour in an urgent push to bolster his party’s chances of keeping control of Congress.

It was Mr. Trump’s sixth visit to West Virginia, and the leading edge of an intensive effort in which officials say he will headline rallies intended to stoke Republican enthusiasm and hold fund-raising events to stock the party’s campaign coffers. The state is home to Senator Joe Manchin III, who is facing a competitive race for re-election despite breaking ranks with his party and becoming the first Democrat to meet with Judge Brett M. Kavanaugh, Mr. Trump’s pick for the Supreme Court.

As Mr. Trump made his way to Charleston on Air Force One, news of Mr. Manafort’s conviction and Mr. Cohen’s plea dominated Fox News on the in-flight monitors. The president touched only glancingly on the issue in front of his enthusiastic crowd and never named either man. But he did denounce “fake news and the Russian witch hunt,” and taunted the team run by Robert S. Mueller III, the special counsel, which secured the convictions against Mr. Manafort.

But he quickly pivoted to border security, which he said was “at the beating heart of this election.”

He led the crowd in a chant of “build the wall,” repeating his false claim that the wall along the Southwest border was already being built — Congress has banned the allocation of border security funding to construct anything but existing barriers — and promising that it would soon be finished.

When Patrick Morrisey, the state attorney general who is Mr. Manchin’s Republican challenger, led a chant of “lock her up” — referring to Hillary Clinton, Mr. Trump’s former campaign rival — the president egged on the crowd, pumping his fist rhythmically with the shouts. 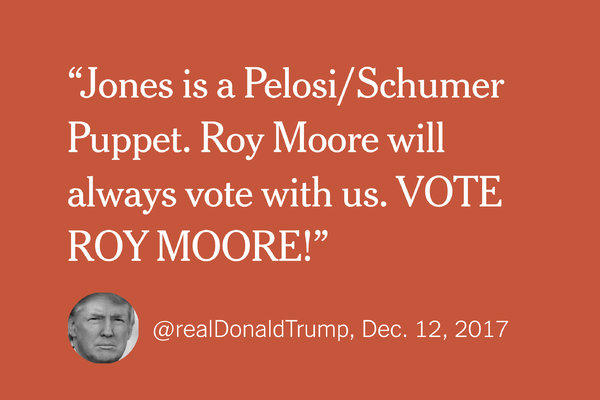 Trump has tweeted support of many candidates who have gone on to win primaries. But his backing may prove harmful when Democratic voters weigh in.

“There’s no worse nightmare for West Virginia this November than Chuck Schumer running the Senate and Nancy Pelosi, with Maxine Waters, running the House,” the president said, naming the top Democrats in the Senate and the House, along with Ms. Waters, a 14-term congresswoman whom he has derided as crazy and “low I.Q.”

But Mr. Trump also added new material to his stock of well-worn rally staples. He regaled the crowd with the story of how, he said, he had jawboned NATO allies into paying more for their own defense. In doing so, he confirmed reports — which the White House had previously refused to do — that he had privately threatened to withdraw from the trans-Atlantic alliance at a summit meeting in Brussels last month.

Mr. Trump said an unnamed leader of another country had asked him, “Would you leave us if we don’t pay our bills?”

Then, he added, “you could see those checkbooks came out for billions of dollars.” But while NATO member countries have increased their military spending over the past year in part as a result of Mr. Trump’s relentless focus on what he calls their delinquency, none pledged any additional money after his closed-door outburst in Brussels.

And Mr. Trump’s frequent claim that NATO allies are in debt to the United States for the cost of the alliance is a misstatement. The funding in question is a target agreed upon by all member countries in 2014 that each should move toward spending 2 percent of their own gross domestic product on defense by 2024.

Still, Mr. Trump used the story to underscore a familiar talking point, saying, “We are a country that has been ripped off by everybody, and we’re not going to be ripped off anymore.”

Mr. Trump also threw in some bizarre flourishes, at one point comparing the time it takes to cut a good trade deal with the patience required to roast fowl.

“We’ve got to take time — it’s got to gestate, right? The word gestate. It’s like when you’re cooking a chicken,” the president mused. “Time, time, turkey for Thanksgiving. My mother would say, ‘Oh, eight hours.’ I said, ‘Eight hours?’ She made the greatest turkey I’ve ever had. It takes time.”

Before Mr. Trump’s visit to West Virginia, White House officials outlined what they said was an aggressive midterm campaign effort that would capitalize on the president’s ability to draw crowds to rallies — held largely in deeply conservative states where he is already popular — and put his muscle behind the Republican National Committee’s fund-raising efforts.

In a phone call with reporters, multiple senior officials familiar with the president’s plans for the midterms said Mr. Trump would be participating in at least eight rallies over the next six weeks and as many as 16 fund-raisers, which officials said had raised more than $227 million for the Republicans so far this election cycle.

Mr. Trump will visit at least seven states — and as many as 15 — in the next six weeks, the officials said, including North Dakota, South Dakota, Missouri, Montana, Nevada, Kentucky and Tennessee. Most are not traditional battleground states, but several are home to Democratic senators who face difficult re-election fights. At recent campaign rallies, in stops in places like Indiana and North Dakota, the president has seemed to relish taking punches at those vulnerable Democrats, with the constant rallying cry that they are obstructing his agenda.

On Tuesday in Charleston, Mr. Trump lauded the power of his endorsement, claiming that he single-handedly turned around the fortunes of Republicans whose popularity had been lagging before he announced his support.

“Look, I don’t want to brag about it, but man, do I have a good record of endorsements,” Mr. Trump said.

He cited as an example Representative Ron DeSantis of Florida, who is facing Adam Putnam, the state’s agriculture commissioner, in a primary contest next week for governor.

“I gave him a nice shot and a nice little tweet — ding ding! — and he went from like three to 20-something,” the president said, adding that with “my full and total endorsement,” Mr. DeSantis was leading his primary opponent by about 19 points. In fact, while Mr. DeSantis had opened a lead in the race after Mr. Trump’s endorsement, a poll released by Florida Atlantic University on Tuesday actually showed him roughly tied with Mr. Putnam.

Why inflation hurts more than it did 30 years ago

Lawmakers angry with Pakistan warn of cuts in aid