ALEXANDRIA, Va. — The trial of Paul Manafort turned into a referendum on the character of two of President Trump’s top campaign aides on Tuesday, as prosecutors cast Mr. Manafort as the architect of a sprawling swindle and defense lawyers portrayed the prosecution’s star witness as a thief, adulterer and liar.

Mr. Manafort personally directed the creation of false financial statements to obtain bank loans and deliberately hid income in foreign bank accounts to evade federal taxes, Mr. Gates testified. When one estimate of his tax bill came out too high, Mr. Manafort fired off a furious email to Mr. Gates.

“How could I be blindsided like this? You told me you were on top of this. We need to discuss options. This is a disaster,” he wrote in one of dozens of documents prosecutors have submitted as evidence.

Mr. Gates, who is critical to the government’s case against Mr. Manafort, came under cross-examination for the first time, offering a chance to assess how he held up under attacks on his credibility.

Mr. Gates’s recounting of Mr. Manafort’s various schemes was almost undone by his description of his own misdoings, including a secret paramour he met for trysts in London. He admitted that he had engaged in so many acts of fraud that he faced up to 100 years in prison if convicted.

He acknowledged that by faking expense accounts, he had embezzled hundreds of thousands of dollars from Mr. Manafort, who employed him for roughly two decades. It was also “possible,” he admitted, that he had stolen funds from Mr. Trump’s inaugural committee in the same fashion.

“Have they confronted you with so many lies that you can’t remember all of them?” Kevin Downing, one of the defense lawyers, demanded when Mr. Gates danced around a question, citing a fuzzy memory. “You seem to have perfect recollection” about Mr. Manafort’s alleged crimes, Mr. Downing said sarcastically, but “you seem to be having such a hard time” recalling your own misdeeds.

Over all, the testimony filled in a picture of two men with few scruples and a powerful thirst for money, hiding payments from Ukrainian clients in foreign bank accounts and deceiving accountants, banks and tax authorities, both individually and together. The pair made millions working for political forces in Ukraine aligned with Russia. But once their principal patron, Viktor F. Yanukovych, was ousted as Ukraine’s president and fled to Russia in 2014, their revenue quickly dwindled.

Mr. Gates testified that Mr. Manafort’s political consultancy, DMP International, did not have a single client in late 2015 and early 2016. By the time the two men joined the Trump campaign that March, he said, vendors were dunning Mr. Manafort about unpaid bills. An accountant testified earlier that they added up to more than $1 million. Yet Mr. Manafort worked for the Trump presidential campaign for no pay, apparently hoping the connection alone would help him land business.

He was forced out of the campaign in August 2016 amid allegations about his work in Ukraine. But he still leaned on Mr. Gates to use his influence to help him win favor with the chairman of a bank that eventually granted him $16 million in loans, partly based on falsified financial documents.

Mr. Manafort pushed for the banker, Stephen Calk of Federal Savings Bank in Chicago, to be appointed to Mr. Trump’s economic advisory council and to be invited to Mr. Trump’s inauguration, Mr. Gates testified. 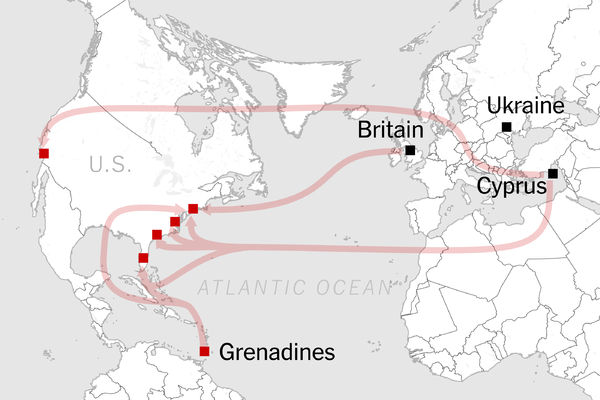 How a Federal Inquiry Says Paul Manafort Laundered $18 Million, and How He Spent It

President Trump’s former campaign chairman is charged with channeling large sums of money from offshore bank accounts to pay for goods, services and real estate in the United States.

In one email to Mr. Gates during the presidential transition, Mr. Manafort wrote, “We need to discuss Steve Calk for secretary of the army.”

Asked what Mr. Manafort was doing for a living at that time, Mr. Gates, who has worked with Mr. Manafort since the mid-1990s, said, “I don’t know.”

The trial is the first by the office of the special counsel, Robert S. Mueller III, who was assigned to investigate Russia’s election interference, possible coordination by the Trump campaign and any other crimes he uncovered.

Mr. Gates’s testimony, eagerly anticipated since the trial began a week ago, was crucial to the prosecution’s effort to show that Mr. Manafort knowingly defrauded tax and bank authorities and had not simply been tripped up by lazy accountants or confusion about complex tax laws. Mr. Gates testified, for instance, that in October 2016, Mr. Manafort personally falsified a profit-and-loss statement for his firm while seeking to secure a bank loan.

In an email, Mr. Gates said, Mr. Manafort sought advice on editing the statement, asking, “How do I convert the PDF into a Word document?” Mr. Gates said Mr. Manafort then changed the document to show that his firm had $3 million in profit instead of more than $600,000 in losses.

He also testified that Mr. Manafort had personally ordered money wired from bank accounts in Cyprus to pay clothiers, landscapers and other expenses in the United States. He said Mr. Manafort’s accountants were never told of those payments — evidence, prosecutors claim, of millions of dollars in illegally concealed income — because “Mr. Manafort said we did not need to.”

But Mr. Gates also demonstrated his own facility at falsifying documents, referring to what prosecutors said was blatant fraud in bland terms. He referred to invoices he altered for Mr. Manafort as “modified” and said that changes to Mr. Manafort’s financial documents sometimes required him to “update” or “edit the template.”

When Mr. Manafort needed false loan documents — either to reduce his reported income to evade taxes or to inflate it to obtain bank loans — Mr. Gates said he called upon a law firm in Cyprus, run by a man nicknamed Dr. K., to help him create the fakes.

His confident delivery turned stumbling when Mr. Manafort’s defense lawyer began delving into financial schemes that Mr. Gates executed for his own benefit, not Mr. Manafort’s. Asked how much of his own income he had illegally hidden from tax authorities, for instance, he said he could not come up with a figure, but had told prosecutors that he did not disclose it all.

Pressed on how he stole $125,000 from one of Mr. Manafort’s accounts, Mr. Gates repeatedly described his transfers of funds for fake expenses as “unauthorized.” When Mr. Downing demanded to know why he refused to use the term “embezzlement,” Mr. Gates replied that Mr. Downing could use “whatever word” he wanted, before finally acknowledging that “it was embezzlement from Mr. Manafort.”

At one point, Judge T. S. Ellis III picked up the defense team’s argument. When Mr. Gates asserted that Mr. Manafort “was very good at knowing where the money was and where it was going,” Judge Ellis pointed out that Mr. Manafort “didn’t know about the money you were stealing, so he didn’t do it that closely.”

Though prosecutors have introduced a wealth of documentary evidence, Mr. Manafort’s lawyers have argued that the government’s case rests almost entirely on Mr. Gates. He was the only prosecution witness they have cross-examined at length. They planned to continue their questioning on Wednesday.

“After all the lies you’ve told and fraud you’ve committed, you expect this jury to believe you?” Mr. Downing asked Mr. Gates, who spent the day on the stand.

“Yes, I made a decision. I’m here to tell the truth,” Mr. Gates said. “Mr. Manafort had the same path” open to him, he added, but “I’m here.” He said he took responsibility for his misdeeds and was “trying to change.”

Wash. woman's listing as slain is surprise to her