Pelosi, Under Threat in Her Own Party, Says She Is Building Bridge to New Leaders

Representative Nancy Pelosi, the Democratic leader in the House, has dismissed warnings from her party that her unpopularity could hinder them in elections this year.

Nancy Pelosi is girding for a mortal challenge to her leadership of the Democratic Party after the November elections or even sooner, and in a signal of reassurance to anxious lawmakers says that she is deliberately building a “bridge” to a new generation of party leaders.

In perhaps the most serious test of her 15-year grip on the House Democratic caucus, Ms. Pelosi is facing unrest from older lawmakers critical of her style, younger Democrats demanding generational change and candidates across the party who have sought to inoculate themselves against Republican attacks by distancing themselves from her.

One of Ms. Pelosi’s deputies, Representative Jim Clyburn of South Carolina, said in an interview that he would seek the speakership if she struggles to amass the required 218 votes after November — an extraordinary acknowledgment of her vulnerability given the culture of deference in Washington.

Ms. Pelosi remains intent on reclaiming the speakership, but in an interview on Wednesday she also acknowledged a handover of power was coming eventually, and she encouraged would-be successors to prove their political mettle. Any aspiring party leader, she said, must demonstrate that “they do have a following, that they’ve shown a vision for the country,” as well as the necessary fund-raising prowess.

“If people want to be the bridge that I’m building toward, they have to show what’s on the other side of the bridge,” she said, stressing that she saw it as her role “to open doors, to build bridges, but there has to be another side to the bridge.”

The most perilous threat to Ms. Pelosi, for the moment, may be the impatient mood in the Congressional Black Caucus, where senior legislators have begun arguing that it is past time to elect an African-American speaker. Black lawmakers and candidates, furious about President Trump’s caustic racial politics and attacks on African-Americans, say they are determined to claim a greater role in steering their party.

Some Democrats have focused on Mr. Clyburn of South Carolina, the third-ranking House Democrat, as a potential successor. Though at 78 he would not represent generational change, Mr. Clyburn would be a history-making figure as speaker: He came under intense pressure at a black caucus retreat in the Mississippi Delta last weekend to take on Ms. Pelosi, with Representative Cedric Richmond of Louisiana and others urging him to step forward. 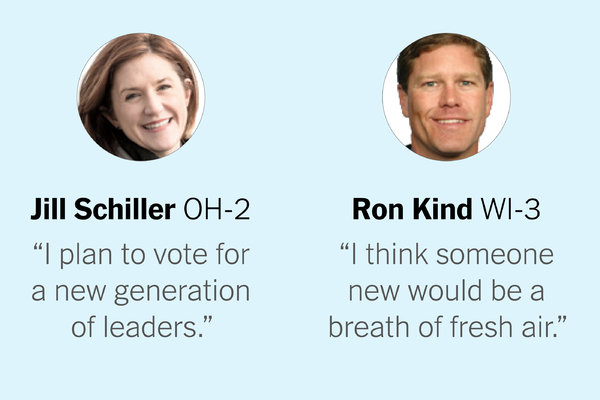 Here are the candidates who are calling for new leadership if Democrats win back the House.

In an interview, Mr. Clyburn confirmed his intention to run if Ms. Pelosi falls short, underscoring the urgency Democrats feel to position themselves for a succession fight.

“If the opportunity is there I would absolutely do it,” said Mr. Clyburn, adding that the ascension of a black speaker would “put to bed forever the notion that the Democratic caucus is taking black voters for granted.”

While Mr. Clyburn, the son of a pastor, said he still supports Ms. Pelosi, for now, he recalled a hymnal from his youth about “keeping your lamps trimmed and burning to be ready when the bridegroom comes.”

Democrats’ private overtures to Mr. Clyburn also reflect concern about Ms. Pelosi’s potential impact on the election, especially after Republicans barely carried a special election in a conservative part of Ohio in part by tying the Democratic candidate to her. The G.O.P. has spent millions over the years to brand Ms. Pelosi as a radical liberal and an avatar of coastal elitism, and even many Democrats who contest that characterization say the ads have taken a toll.

Ms. Pelosi has projected iron self-assurance about her political future and has dismissed complaints from Democrats about her unpopularity with voters. She is the party’s most formidable fund-raiser, and her aides say she has sturdy support from a majority of House Democrats who credit her with ushering in the policies on health care and business regulation that Republicans have attacked.

In the interview Wednesday, wedged between six different events in the state of Texas, Ms. Pelosi said she was spending no time preparing for a leadership contest. But this weekend her imposing stature as a party leader will be on vivid display: She is gathering her financial network in Napa Valley for a conference with party luminaries like Gov. Jerry Brown of California and John F. Kerry, the former secretary of state. An aide said nearly 300 people would attend.

Ms. Pelosi said she was untroubled by Mr. Clyburn’s statement of interest, calling him a “beautiful, lovely member of Congress” whom she views as a brother.

But she said it was “perplexing” that the news media — or anyone else — would seek to game out the power politics of the Democratic caucus in the midst of a campaign.

“The fate of our nation is at stake in this election,” Ms. Pelosi said.

Ms. Pelosi’s fiercest supporters view much of the criticism directed at her, from both Republicans and Democrats, as anchored in bias against her gender or age. They point to unpopular and long-tenured leaders like Senator Mitch McConnell, the majority leader, to denounce the challenges to her own position.

And yet those challenges have steadily grown: Mr. Clyburn and his supporters are one of several clusters of Democrats attempting to loosen Ms. Pelosi’s grip on the leadership.

Representatives Seth Moulton of Massachusetts and Kathleen Rice of New York have been leading a group of insurgents who are urging Democratic candidates to pledge that they will not support Ms. Pelosi for speaker. A larger, diffuse group of old-guard lawmakers, including Representatives John Larson of Connecticut, Ed Perlmutter of Colorado and Michael E. Capuano of Massachusetts, have been holding meetings and carrying on text-message conversations about spurring change after the midterms, according to several participants in the conversations.

Mr. Moulton, 39, said he was hopeful Ms. Pelosi would soon conclude that her position had become untenable.

“It’s far better for her to graciously step down before the election, so that Republicans can’t use that attack against Democrats, than to wait until after the election,” Mr. Moulton said.

A diverse group of several dozen Democratic candidates, across all regions and ideological factions, have pledged to demand new leadership if they are elected.

Many of the dissenters are younger Democrats, including some prominent candidates of color who are likely to join the freshman class: Jahana Hayes, 46, who is seeking to become Connecticut’s first black Democrat in Congress, won a primary on Tuesday after pledging to oppose Ms. Pelosi. Rashida Tlaib, 42, a Muslim, said after her primary victory in Michigan this month that she would “probably” oppose Ms. Pelosi.

Ms. Pelosi said she welcomed the attacks from Republicans and urged Democrats to distance themselves from her if necessary. “I don’t care,” she said. “Let them do whatever they want. We have to win the election.”

Some Democrats said relief might come only if Ms. Pelosi states she will not seek the speakership again.

“That would probably work in terms of defusing it, because there’s lots of people that aren’t fans of hers,” said Richard Ojeda, a populist Democrat running in a conservative West Virginia district.

But Ms. Pelosi’s supporters view efforts to oust her as political treachery and argue that she is a resilient leader whom Republicans have unfairly demonized. Some doubt that her unpopularity might cost Democrats seats. During a summer meeting at the Democratic Congressional Campaign Committee, Representative Jan Schakowsky of Illinois sharply assailed Mr. Moulton, who was not present, for stoking a mutiny.

Ms. Schakowsky said in an interview that she simply did not believe Ms. Pelosi was a drag on Democratic candidates. She said she was fed up with Democrats “trying to take Nancy down.”

“There is no question that Nancy Pelosi is a huge net asset to the Democratic Party,” said Ms. Schakowsky, 74. Of the Republicans’ Pelosi-themed attacks, she said there was “zero evidence that this has any effect on the outcome of elections.”

Other supporters have avoided such sweeping assertions, but still argue that she deserves another turn as speaker. Representative Ro Khanna of California, a 41-year-old in his first term, said it would be wrong to “deprive one of the most consequential progressive leaders” of the speakership.

Ms. Pelosi has taken steps in recent weeks to accommodate those demanding change: She agreed to delay leadership elections until December, rather than holding a snap vote. And she recently named an ally, Representative Jim McGovern of Massachusetts, to lead a review of House rules that lawmakers complain have concentrated power at the top.

Yet some in Ms. Pelosi’s camp acknowledge that her ability to gather 218 votes may depend on the scale of Democratic gains. Should the party take only a bare majority, there could be enough “Never Pelosi” lawmakers to prevent her from winning.

Representative Filemon B. Vela Jr. of Texas, a moderate in his third term, said he had assembled a list of nine incumbents who would vote to deny Ms. Pelosi the speakership. He said he had been urging fellow Democrats to watch a 2009 BBC film, “Margaret,” about the downfall of Margaret Thatcher, as inspiration for upending a legislative chieftain.

“If our majority is nine or less, then we will be in a position to force a leadership change,” said Mr. Vela, 55, adding that a wave election could challenge that calculus: “Donald Trump may deliver the kind of majority that Nancy needs to stay.”

If Democrats fail to capture the majority, their entire leadership team would likely step down.

There is persistent doubt among Democrats that Ms. Pelosi can be dislodged with some version of a parliamentary no-confidence vote. In a private meeting before the recess, in which about 15 House Democrats discussed who might lead them in a new majority, Representative John Yarmuth of Kentucky voiced that skepticism, according to three people present: If nobody would commit to challenging Ms. Pelosi, he demanded, what is the point of having such meetings?

Though Mr. Clyburn is the most prominent Democrat to say he would take the job, he might not slake the party’s thirst for generational change. Both he and Ms. Pelosi will turn 80 during the next Congress, as will Representative Steny Hoyer of Maryland, the third member of the leadership team, who also covets the speakership. At a handful of private fund-raising events in Philadelphia for House candidates earlier this week, Mr. Hoyer repeatedly used the phrase “if I am majority leader or speaker” in discussing the party’s agenda, according to a Democrat in attendance.

Several allies of Ms. Pelosi also suggested that if she cannot corral 218 votes, she might prefer to elevate a lawmaker from outside the current ruling triumvirate rather than be replaced by a male colleague in the winter of his political life.

Ms. Pelosi declined to say if she would prefer her successor to be a younger colleague. “That’s not up to me,” she said.

A Year After Charlottesville, Disarray in the White Supremacist Movement