The results of the Ohio special election are too close to call. Why did the Republican party have to fight so hard to defend this long-held House seat?

• Gretchen Whitmer won the Democratic nomination for governor of Michigan, joining women in Georgia, Texas, South Dakota and elsewhere who are competing in November to lead their states.

• Kris Kobach, the Kansas secretary of state, was in a tight race against Gov. Jeff Colyer for the Republican nomination in the governor’s race. President Trump endorsed Mr. Kobach despite some Republican misgivings.

• Here are five key takeaways from the results.

WESTERVILLE, Ohio — Republicans spent millions of dollars on scorching television ads, pried a reluctant endorsement from Ohio’s moderate governor, used the Democratic leader Nancy Pelosi as a foil and enlisted President Trump in a last-minute turnaround effort in a special election for Congress in Ohio.

And after all that, in a conservative-leaning district outside Columbus, the Republican candidate clung to the narrowest of leads on Tuesday night.

The Republican, Troy Balderson, a state senator who ran a plodding campaign, led his Democratic challenger, Danny O’Connor, by nearly 1 percentage point with all precincts reporting. But 3,435 provisional ballots have yet to be counted, with Mr. Balderson’s margin standing at 1,754. Ohio law provides for an automatic recount if the two candidates are ultimately separated by less than half a percentage point.

National Republicans declared victory before midnight, but it could be days or weeks before there is a conclusive result in the race. And regardless of the outcome, Mr. Balderson and Mr. O’Connor will face each other again in three months, in the regularly scheduled November election.

But already, Republicans’ brush with catastrophe in Ohio has deepened the party’s gloomy mood, highlighting the massive political mobilization among Democrats and the comparative demoralization of the Republican base. The district that Mr. Balderson may have barely won voted for Mr. Trump by 11 points less than two years ago, and routinely elected Republicans to Congress by landslide margins before that.

And on the Democratic side, the Ohio vote is likely to reignite debate about the cost of keeping Ms. Pelosi as party leader, and whether her declared intention to try to become House speaker again could limit their gains in November — or even cost them a chance to win the majority.

Mr. Trump claimed credit for Mr. Balderson’s apparent survival, pointing out that the former auto dealer had trailed badly in early voting and fared better on Election Day, just days after the president visited the district. “After my speech on Saturday night, there was a big turn for the better,” he boasted on Twitter.

Even as Mr. O’Connor appeared to fall short, however, he significantly improved upon Hillary Clinton’s performance in the district’s suburban precincts, and he overwhelmed Mr. Balderson in the sort of high-income enclaves Republicans must perform better in to hold their 23-seat majority in the House.

As ominous for Republicans was the sizable gap in turnout between the most heavily populated suburban counties and the more rural reaches of the district. A higher percentage of voters from Franklin and Delaware Counties, the two largest jurisdictions, cast ballots than in the other, far smaller five counties. 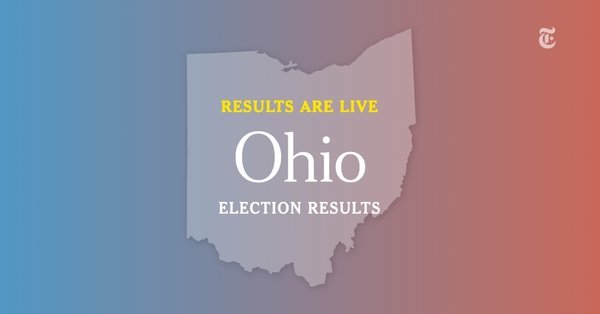 See full results and maps from the special election for Ohio's 12th District.

“We are in a tied ballgame,” Mr. O’Connor said at his election night party, refusing to concede. He then repurposed his speech into an appeal for the general election in November; he and Mr. Balderson have both been nominated to face off again then.

“We’re not stopping now,” he said. “We must keep fighting through November.”

Mr. Balderson spoke for only about three minutes in a Doubletree Hotel ballroom filled largely with men, who briefly broke into a couple of chants of “Trump, Trump” that soon died out. Mr. Balderson alluded just briefly to Mr. Trump’s visit to support him.

“Over the next three months I’m going to do everything I can to keep America great again,” he said. “Danny O’Connor ran a hard race and I look forward to campaigning against him again this fall.”

In voting elsewhere Tuesday, Gretchen Whitmer, a former Democratic leader in the Michigan State Senate, claimed her party’s nomination for governor, setting up a crucial test for Midwestern Democrats and organized labor in November. Ms. Whitmer will face Bill Schuette, the state attorney general. Republicans have dominated Michigan for most of the last decade and Mr. Trump carried the state narrowly in 2016. The governorship is a vital prize for Democrats seeking a comeback there.

In the Senate race in Michigan, John James, an African-American Republican who also had Mr. Trump’s backing, won the nomination to challenge the Democratic incumbent, Debbie Stabenow. And in a race to replace longtime representative John Conyers Jr., who resigned in December after allegations of sexual misconduct, Rashida Tlaib took a major step toward becoming the first Muslim woman in Congress by winning the primary to compete in November in a safely Democratic seat.

In Missouri, Josh Hawley, the Republican state attorney general, will face off against Senator Claire McCaskill, a vulnerable Democrat.

And while Mr. Trump crowed about lifting Mr. Balderson in Ohio, his ability to propel a much-closer ally in the Republican primary for Kansas governor appeared uncertain Wednesday morning. One day after he received an endorsement from Mr. Trump that he had aggressively lobbied for, Secretary of State Kris Kobach was clinging to a very slim lead over Gov. Jeff Colyer with almost all precincts reporting. However, Mr. Colyer was enjoying an advantage in Kansas’s most populous jurisdiction, Johnson County, where nearly all the remaining votes were to be counted.

If Mr. Kobach, who has made a national name for himself for devising crackdowns on immigration and voting rights, were to lose, it would snap Mr. Trump’s streak of success in Republican primaries. The president has crowned Republican nominees from Georgia to South Carolina to Alabama in recent nominating contests. In the case of Kansas, though, Mr. Trump defied White House aides and other high-level Republican officials who urged him to stay out of a race involving a sitting governor. Many Republican leaders, and most all Democrats, believe Mr. Kobach would be a weaker general election candidate for the G.O.P. and perhaps imperil their grip on the state’s governorship

But it was the Ohio congressional race that transfixed Democrats and Republicans as one of the marquee midterm battles of the summer. The Republican Party’s tactics that helped Mr. Balderson are now likely to be reproduced across the country this fall, as Republicans defend their congressional majority in similar districts stocked with the right-of-center suburbanites who proved so elusive in the special election.

Republicans prevailed in Ohio by wielding a set of divisive issues — including gun rights, immigration restriction and taxes — that mobilized just enough voters on their side, particularly in the exurban and more rural reaches of the district. And they invoked Ms. Pelosi at every opportunity.

Mr. Trump attacked Mr. O’Connor in a weekend rally as an agent of Ms. Pelosi, even though Mr. O’Connor pledged he would not vote to make her speaker of the House.

Yet Mr. Trump, in a characteristic moment of thinking aloud, also ruminated on the difficulty of the midterm environment. Pleading with Ohio Republicans to show up for Mr. Balderson, he identified the dynamic that made the race so taxing for his party: Republican lethargy and disillusionment.

“Whoever has the White House, that party tends to lose the midterms,” Mr. Trump said. “I don’t know why. Maybe it’s complacency. Maybe you all fight so hard for the presidency and you win and you’re a little complacent.”

Mr. O’Connor, whom Mr. Trump dubbed “Danny Boy,” was somewhat handcuffed by the nature of the district. It includes high-income and well-educated voters close to Columbus who revile Mr. Trump, as well as a more pro-Trump rural element toward the seat’s outer boundaries. So the Democrat studiously avoided training fire at the president, taking care to note in an interview Monday that he had been “at Mass” during Mr. Trump’s visit.

Asked about his reaction to Mr. Trump’s intervention, Mr. O’Connor insisted he was “indifferent” and shifted to safer topics that he said voters wanted to discuss when he knocked on their doors: Social Security and the cost of college.

Mr. Balderson and his allies also fought apathy among hard-core conservatives and disaffection among Republicans closer to the political center, fearing up to the end that they would be swamped by overwhelming turnout among Democrats and independents.

Ambivalence about Mr. Trump was on display across the district on Election Day, as enthusiasm for the state of the economy mingled with misgivings about the president’s record and personal conduct.

John Begley, 43, an insurance executive who voted for Mr. Balderson, said he did so to send a message of support for Mr. Trump.

“It’s important that we stand behind what we voted for in the general election,” said Mr. Begley. Asked what he was happy with about the president’s record, Mr. Begley answered: “My investment accounts.”

For some voters, economic prosperity was not enough to allay a deeper sense of unease. Pam Moore, 57, said that even though “my stocks are doing well,” she voted for Mr. O’Connor. She said Mr. Trump scares her.

“I’m afraid he’s going to make some crazy decision that could turn us around in the wrong direction,” said Ms. Moore, who works in the loan department of a bank.

Josh Wickham, 38, a community college administrator, voted for Mr. Trump in 2016 but for Mr. O’Connor on Tuesday. He said he wanted a Democratic-majority House to be a check on the president, especially over some conservative social positions the White House has promoted. A sister of Mr. Wickham’s is married to another woman and is “terrified,” he said, of a conservative Supreme Court reversing same-sex marriage.

The special election was set in motion earlier this year by the resignation of Pat Tiberi, a nine-term incumbent who quit midway through his term to take over a business association back in the state capital. Republicans initially believed they could hold the district with relative ease, so long as they nominated a mainstream candidate. And so the party worked aggressively to steer Mr. Balderson, 56, through a contested primary that he barely won.

But Mr. O’Connor, the 31-year-old county recorder in Franklin County, which includes Columbus and is the most Democratic-leaning part of the district, proved unexpectedly formidable as a challenger, collecting more money for his campaign than Mr. Balderson and assailing the Republican as a threat to popular health care and retirement-security programs. And Mr. O’Connor aligned himself in his rhetoric with Gov. John R. Kasich, Ohio’s Republican chief executive who is an outspoken critic of Mr. Trump, and who withheld his endorsement from Mr. Balderson until the last week of the race.

Mr. Balderson struggled to raise money and kept a modest campaign schedule, forcing Republican outside groups to bail him out with expensive independent advertising campaigns. And despite fears about unsettling swing voters, Republicans ultimately called on Mr. Trump to help stir up support for Mr. Balderson among conservatives who were mostly tuned out of the race.

Mr. O’Connor may have handed Mr. Balderson a decisive gift in the final stages of the race when he seemed to soften his pledge to oppose Ms. Pelosi in a television interview. The brief fumble gave Republicans a valuable opening to attack Mr. O’Connor as a conventional Democratic partisan in a district that leans well to the right.