Jackie Brenner, 18, practicing yoga in the yard of a family friend’s home in Bryn Mawr, Pa., in July. Through her nonprofit, Piece of Peace, she teaches others how to live healthy lives.

Two years ago, when Jackie Brenner was 16, she was struggling to recover from a difficult knee surgery and to deal with her mother’s fight with breast cancer. Her life was full of stress.

She started researching meditation, yoga and nutrition, and she incorporated what she found into her daily routine. Soon, she started spreading her enlightenment to other students. Through Piece of Peace, Ms. Brenner’s nonprofit, she teaches others how to live healthy lives.

The effort is most established in Palm Beach County in Florida, but Ms. Brenner, now 18, also has volunteers — high school students — who teach the curriculum in Philadelphia and Exeter, N.H., and she offers all of her materials free at pieceofpeace.world.

The volunteers work at places like Y.M.C.A.s and Boys & Girls Clubs to teach Ms. Brenner’s nutrition curriculum to younger children. They learn how certain foods affect the body, and they practice yoga poses and study the benefits of meditation, which Ms. Brenner said she finds particularly important.

Research has documented how students’ frustrations, fears and out-of-school trauma can get in the way of learning. A growing number of schools now teach children how to meditate and quiet their anxieties, hoping that their increased focus will help them perform better in school. Ms. Brenner’s work fits right into this trend.

“Through meditation, I feel every kid can find that inner peace and that inner quiet that we all kind of lose, especially in school and with all the stressors we have in life,” she said. — Tara Garcia Mathewson

Children are generally egocentric by nature. But research shows that those who learn to understand and care about the feelings of others do better in life.

So the producers of a leading classroom online tool collaborated with an educational psychologist to design an online program for parents and others to teach empathy skills to children as young as 5.

Experts say many of today’s young adults show far less ability to be empathetic than young adults did in the 1980s. Teachers say that after the training, they often see an immediate impact.

“The kids who are most in tune with their feelings and others’ feelings tend to be the ones who excel,” said Lynn Bamrick O’Meara, a Detroit-area kindergarten teacher of 34 years.

But parents don’t have to wait until their child is 5 to start teaching empathy. Ms. Borba says adults can begin when children are infants by naming feelings, modeling kind actions and reading books with children that evoke emotions.

Connecting Students With College and Careers

The final year too often meanders, as students load schedules with electives, allow their grades to sag and fritter away time until graduation. Some must take remedial courses when they get to college.

But at some high schools, seniors are swapping electives they don’t need for courses their futures demand. Enrollment in classes that let high schoolers earn college credits has jumped, and some states are even starting to tighten high school graduation requirements to better align them with the needs of the labor market.

According to one study, more than 635,000 students under 18 took community college classes in 2015, an increase of 122 percent from 2001. Participation in Advanced Placement classes has risen, too: 2.7 million students took at least one A.P. exam last year compared with 1.3 million in 2006.

The growing cost of college is driving parents to get students into these dual-enrollment programs, said Adam Lowe, executive director of the National Alliance of Concurrent Enrollment Partnerships.

Take Goose Creek Memorial High School, in the oil-industry hub of Baytown, Tex. The school has made a point of hiring teachers with master’s degrees who are credentialed to teach classes in which teenagers earn dual credit with nearby Lee College. Some students have even earned an associate’s degree while still in high school.

Goose Creek has started sharing data with Lee College to track academic progress and help connect the students with local employers. With these and other changes, Susan Jackson, the principal, says the share of her students who are graduating ready for college and careers has grown from 40 percent a few years ago to 75 percent.

Joel Vargas, a vice president of the nonprofit group Jobs for the Future, says educators will need to keep a close eye on quality as demographic changes compel colleges to scour for students to fill emptying classrooms. But stitching together high school with college and careers will become only more important as good jobs for people without advanced training disappear, he says.

“Communities will need to be more thoughtful about how to provide an on-ramp into the future for young people.” — Caroline Preston

What I Wish I’d Known Before College

We asked some of The New York Times’s 2018 newsroom interns what they wish they had known before they went to college. Illustrations by Kyle Hilton.

“I feel like community college puts you in a really real-world situation because you’re with all different types of people, and that helped me understand that I just need to make whatever I want to do happen.”

“It’s significantly different from high school, and you don’t have to do everything, like you did in high school.”

“There’s a lot of luck and chance that goes into things that are beyond our control. Being more aware of that and knowing that there are a lot more options than people realize.”

“Not everyone is going to be there the entire time: Everyone is on a different path, a different journey, so they may not come back to school next year.”

“I really wish I would have gotten into the habit of jumping on top of deadlines and stayed ahead of the curve earlier in college. I was surprised by how much there was to learn in such a short amount of time.”

Getting More Out of Screen Time

No matter how hard they try, many parents have trouble keeping their children away from screens. If they will be watching anyway, can you make that time more productive and educational?

That’s the idea behind “Preschool Clues,” a new book by Angela Santomero, the creator of the popular children’s show “Daniel Tiger’s Neighborhood,” which has some suggestions to help preschoolers get the most out of screen time and help parents feel less guilty.

Pause the episode and ask questions. “What do you think will happen next?” “What is the character feeling?” This teaches children to be critical thinkers, Ms. Santomero said. “The more we model it, the more they will ask these questions no matter what they are watching.”

Include characters in dinner conversation. Ask your children to reflect on the shows they’ve watched by talking about characters as if they’re real-life friends. “What did Daniel Tiger do today?”

Use the show in playtime. You can encourage critical thinking about media by including characters in play — drawing pictures from a show, re-creating a craft activity, or writing or drawing a new end to the story.

If you can’t interact with your child during TV time, choose “quality” media. “Just because a show says it’s educational doesn’t mean it is,” Ms. Santomero said. Quality media should teach skills like reading or kindergarten readiness and invite the child to participate. If it doesn’t, find an element of learning you can draw out. “Whenever we’re talking about anything they’ve watched,” Ms. Santomero said, “we can turn it into an educational moment.” — Jackie Mader

Average number of bot messages sent to each student over the summer:

Portion of students who responded to the bot at least once:

Average number of student replies to the bot:

One or more tailored, artificially intelligent responses were sent to

Includes both automated notices and responses to student questions.

About one in 10 of these needed a human response.

of students in the Georgia State study.

“Newly accepted freshmen must complete these steps to become a registered student ...”

“When is the day tuition is due?”

Pct. of students not using the bot who completed each task:

in completion rates by bot-using students, in percentage points: 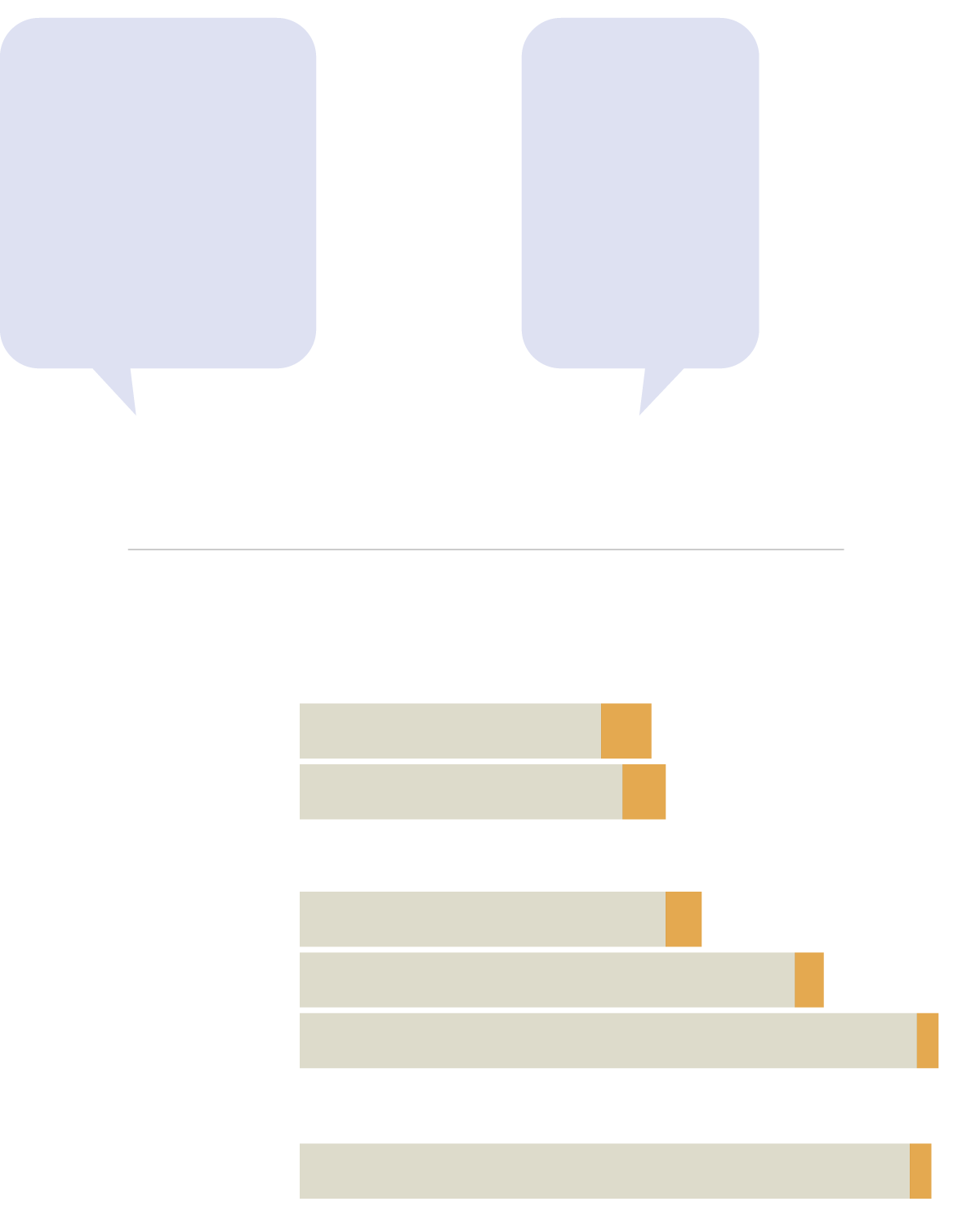 One or more tailored, artificially intelligent responses were sent to

Average number of bot messages sent to each student over the summer:

Portion of students who responded to the bot at least once:

Average number of student replies to the bot:

About one in 10 of these needed a human response.

Includes both automated notices and responses to student questions.

of students in the Georgia State study.

“Newly accepted freshmen must complete these steps to become a registered student ...”

“When is the day tuition is due?”

Percentage of students not using the bot who completed each task:

IMPROVEMENTS in completion rates by bot-using students, in percentage points:

It has become the norm for teachers to use their own money to pay for supplies. Ninety-four percent of them do so, spending a median of $297, according to a Department of Education survey.

That is now shifting — teachers are becoming fund-raisers. PledgeCents, an educational crowdfunding website, partnered with Teach for America in 2015 to make free crowdfunding pages for new T.F.A. recruits. Last summer, they raised more than $300,000 and over 90 percent of new recruits signed up, according to Andyshea Saberioon, PledgeCents’ founder.

But Mr. Saberioon said he believed that crowdfunding sites weren’t the ideal solution. So this summer, he began a new project with Alice Keeler, a math teacher from California, called Teachers Are Professionals. The goal of the site is to eliminate the expectation that teachers pay out of pocket for anything.

“Schools have always been asking teachers to hustle as fund-raisers,” Ms. Keeler said. “But that just goes back to the cultural expectation that teachers are funding their own classroom, and that’s what needs to change.”

In the short term, Ms. Keeler wants to bring teachers across the country together so that they can get bulk-order discounts on educational technology. Her long-term goal is to give teachers who sign up at teachersareprofessionals.com three technology products of their choice, three professional development books, and a $300 gift card to a big-box store or online retailer.

Ms. Keeler and PledgeCents will work with corporations and private donors to raise money. At the moment, however, they don’t plan to lobby for increased public education spending. — Sharon Lurye

Today’s Students May Be Emotionally Unprepared

Give More Low-Income Students a Path to College

No Light Between Diversity and Free Expression

Asbestos in a Crayon, Benzene in a Marker: A School Supply Study’s Toxic Results